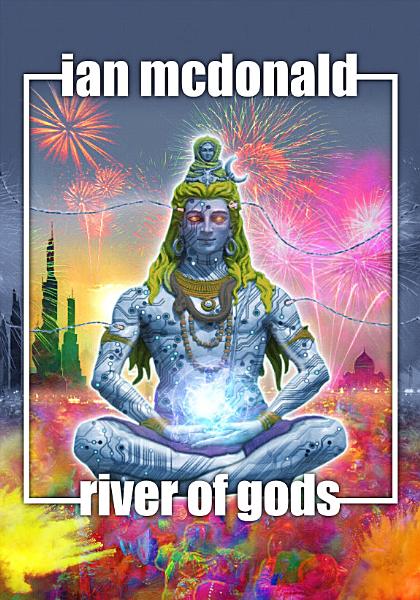 A superpower of two billion people, a dozen new nations from Kerela to the Himalayas, artificial intelligences, climate-change induced drought, water wars, strange new genders, genetically improved children that age at half the rate of baseline humanity, and a population where males outnumber females four to one.

This is India in 2047, one hundred years after its birth.

In the new nation of Bharat, in the face of the failure of the monsoon, nine lives are swept together — a gangster, a cop, his wife, a politician, a stand-up comic, a set designer, a journalist, a scientist, and a dropout — to decide the future of Mother India.

River of Gods teems with the life of a country choked with peoples and cultures — one and a half billion people, twelve semi-independent nations, nine million gods. A war is fought, a love is betrayed, a mystery from a different world decoded, as the great river Ganges flows on.

Praise for River of Gods:

“[A] bold, brave look at India on the eve of its centennial, 41 years from now...McDonald takes his readers from India's darkest depths to its most opulent heights, from rioting mobs and the devastated poor to high-level politicians and lavish parties. He handles his complex plot with flair and confidence and deftly shows how technological advances and social changes have subtly changed lives. RIVER OF GODS is a major achievement from a writer who is becoming one of the best sf novelists of our time.” —Washington Post

“[P]erhaps his most accomplished novel to date... reminiscent of William Gibson in full-throttle cultural-immersion mode, packed with technical jargon, religious and sociological observation and allusions to art both high and low... RIVER OF GODS amply rewards careful consideration and more than delivers its share of straight-ahead entertainment. Already a multiple-award nominee following its British publication, McDonald's latest ranks as one of the best science fiction novels published in the United States this year.” —San Francisco Chronicle