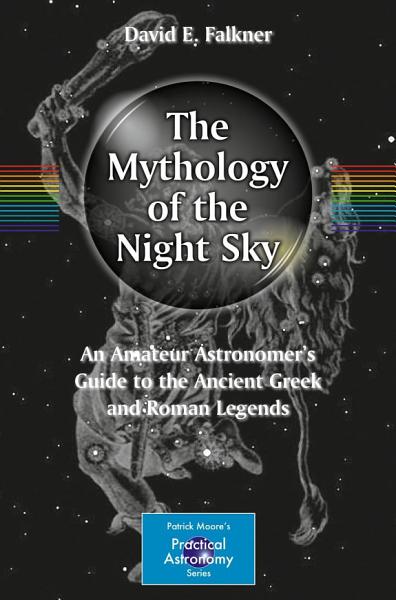 The Mythology Of The Night Sky

Every amateur astronomer can easily recognize at least most of the constellations. For example, Orion: the brilliant stars Betelguse and Bellatrix form the shoulders of The Hunter, Saiph and Rigel his feet, and the bright diffuse nebula M42 makes a sword hanging from his belt, made up of three prominent stars. But how many of us know the story of Orion? What myths did the ancient Greeks weave around this mighty hunter that placed him so prominently in the sky? Did you know that this mythical being was said to have been killed by Artemis, herself a hunter, while he lay exhausted by his fight with Scorpius, dominated by the red supergiant Antares, which hangs in the sky opposite Orion.

The Mythology of the Night Sky is intended primarily for amateur astronomers who would like to know the mythology behind the names of constellations and planets. It deals with the 48 constellations identified by the ancient Greek astronomer Ptolemy, as well as all the planets of our solar system and their moons, which are named after Roman gods.

To assist practical observers the book is organized by season, and gives the location and description of each constellation, including named stars and deep-sky objects. Readers are encouraged to observe and image the constellations for themselves, and there is a lot of practical information in this book to help them along the way.

Each Greek mythological story is told in its entirety. Often this shows how several constellations are related, giving the reader a greater appreciation of why the character, animal, or object was awarded the honor of a place in the night sky.

In addition to providing a detailed (and mostly Greek) mythology of the constellations and the vast soap opera that was part of the ancient Greek pantheon, The Mythology of the Night Sky also covers the planets of our solar system, which are named after Roman - not Greek - gods. The significance to the Romans for the names of the planets is explained, as well as how the named moons orbiting the planets (many of them named relatively recently) related to their parent planet's name. Later discoveries such as Uranus, Neptune, Pluto, and their moons have been added in recent times.

The Mythology of the Night Sky strikes a unique balance between "backyard astronomy" and mythology. It describes each constellation and its observation and imaging, but unlike most astronomy books it also tells the mythological tales in full. Not only will readers appreciate the importance of the mythological characters, and why they were immortalized in the stars, but they will also see how many times several constellations are part of the same story and that even their location in the night sky was significant to the ancients.