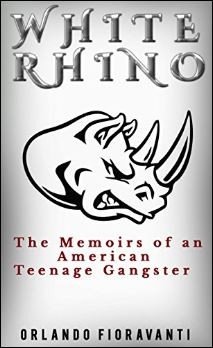 White Rhino The Memoirs Of An American Teenage Gangster

White Rhino is the true, life story of reputed Italian gangster, Orlando Fioravanti's change from living a life of crime, to a life of serving God.

In the book, Orlando takes you back to the mid 80's when he was just a teen-ager. A wild teenager who was given the rare opportunity to distribute cocaine in large quantities in the Philadelphia tri-state area of New York, New Jersey, and Pennsylvania.

Due to Orlando's connections he spent 12 years living an amazing life and lifestyle, as Orlando takes you on the ins and outs of "the game", and all that comes with it like money, power, women, and event movie stars. Travel along all those years with Orlando, and his crew of three that he would assemble to insulate him from the bullets, and the feds. Where it wouldn't be until 14 years after Orlando began living a lifestyle of a King in America that he would finally be convicted of a crime and sentenced to 15 years of hard time.

Walk with Orlando through the old penitentiary as it was called back then, to see, hear, and smell, what it was like to do hard time. So hard that due to Orlando tussling with a prison guard he was thrown in the RHU, better known as the hole, for a one year torture session with the guards. A torture session neither he nor anyone else who assaulted staff was supposed to, live through.

It was at that time, that upon Orlando's death, he had an encounter with God. One that would bring him back alive, with the knowledge of a secret from the Bible, and a message from God.