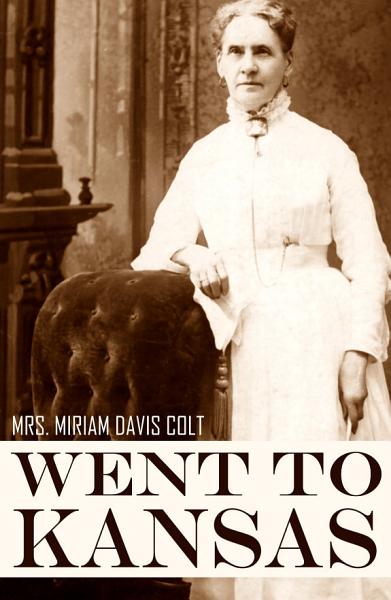 In 1856, Miriam Colt, her husband, and her two small children set out for Kansas territory to make a new life. They were part of The Vegetarian Settlement Company, an organization formed to create a like-minded community committed to not eating meat and opposed to slavery.

This was the time of Bleeding Kansas and they more than once met with "Border Ruffians," nearly at the cost of their lives. On the trip out:

"The steamer struck a “snag” last night; gave us a terrible jar; tore off a part of the kitchen; ladies much frightened."

This was only the beginning of the troubles they would experience like thousands of other pioneers.

"Have ridden forty miles in a stage-coach, over very rough roads. In some places we found the snow four and five feet deep—we were obliged to get out and walk some distance. The men had to work hard to keep the stage right side up."

Arriving at the site of the proposed settlement, they found no buildings had been constructed. They were close to Indian land, and Mrs. Colt writes in her diary frequently of premonitions of disaster.

For the first time, this long out-of-print volume is available as an affordable, well-formatted book for e-readers and smartphones.

Be sure to LOOK INSIDE by clicking the cover above or download a sample.