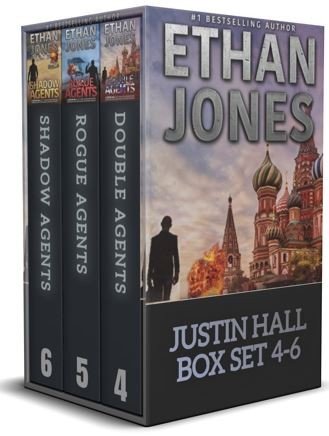 Enjoy the first three electrifying spy thrillers in the Justin Hall series from Ethan Jones, the master of international intrigue and bestselling writer.

Fighting the enemies within…

The CIA learns that a powerful Chechen terrorist group is plotting a major attack on US soil just as the same group assassinates Russia's minister of defense in Moscow. The CIA and the FSB, Russia's internal security service, deeply distrust each other, crippling the CIA's effort to unravel this plot.

Justin Hall and his partner, Carrie O'Connor—Canadian Intelligence Service's most lethal operatives—are dispatched to Moscow to secure the FSB's intelligence. But FSB double agents within will stop at nothing to prevent them.

Justin and Carrie now find themselves on the run, forced to form a shifty alliance with rogue operatives. As loyalties change in the blink of an eye, they hunt down Chechen militants in their stronghold to uncover the truth, but will they prevent the terrorist attack planned against the US in time?

Sent to kill one of your own…

After a nuclear incident in Pakistan, two Canadian Intelligence Service agents disappear during a covert operation in South Korea. They end up in a prison camp in North Korea, where they are being tortured so they can reveal top secret intelligence.

CIS sends in their best spy masters, Justin Hall and Carrie O’Connor, fresh off a terrorist-hunting mission in Syria. Their orders are clear: infiltrate the most hostile nation in the world. Their objective is like nothing they have faced before: assassinate the two captured agents, one of whom is Justin’s close friend.

Justin and Carrie consider their allegiances and consequences of their operation, as they join forces with a North Korean defector and two MI6 agents familiar with the treacherous terrain. As new intelligence complicates their already nearly impossible mission, it is now a race against time to reach the captured agents before it is too late…

Keep your asset safe at any cost...

When combat-hardened Justin Hall and his partner Carrie O’Connor, CIS’ best field operatives, narrowly foil a suicide bombing in Berlin, one of the cell members escapes and Justin is the only one that can identify him.

Dispatched to track the fugitive at all costs, the terrorist hunt begins to reveal an unsettling game of deception and betrayal. Implicating top officials in opposing intelligence agencies. The trail leads them down dark alleys and dead ends inside terrorist-infested Jordan, Syria, and Iraq.

While the world watches as Israel and Palestine are desperately working towards a peace treaty, Justin discovers that the Israeli prime minister is marked for assassination ... by one of his own...

With unlikely allies and unstoppable powers, can Justin and Carrie undo the plot before the Middle East explodes into an all-out war?

★★★★★ “A non-stop, roller-coaster ride of firefights, explosions, and traitors.”

★★★★★ “Move over Flynn, Child, and Thor, you have a new neighbor. Very enjoyable reads.”

Scroll up, click to buy now, and join Justin Hall as he embarks on these explosive missions—and be part of the series that is igniting the globe!