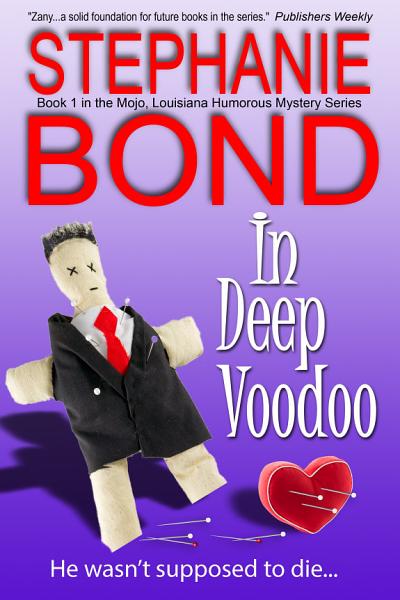 This fun romantic mystery will cast a spell on you!

Start with bad mojo, add a pinprick of revenge, and watch things boil over…

There’s something strange afoot in the small touristy town of Mojo, Louisiana. Yet even as the annual voodoo festival gets underway, Penny Francisco refuses to believe in black magic. Her thoughts are on the Victorian house across the street from her health food business—her lying, cheating ex-husband Deke is having the house that she restored painted pink! Isn’t it enough that he moved in his busty mistress and Penny has a front row seat to all their shenanigans? At her divorce party Penny receives a “Deke” voodoo doll as a gag gift, and vents her frustration by stabbing it with a pin as a joke. But later when Deke is found stabbed to death, Penny doesn’t have to be told she’s managed to land herself IN DEEP VOODOO.

Praise for IN DEEP VOODOO:

“A satisfying tale of sex, love, and voodoo, I highly recommend this book as your guilty pleasure on the nightstand.”  —FreshFiction

“The intertwining of voodoo is quite intriguing, and the two main characters are wonderfully drawn.” —Romantic Times Book Reviews

“An engaging story and clever mystery, IN DEEP VOODOO is not to be missed.” —Romance Reviews Today

If you like your mysteries brewed up with a lot of comedy and a little romance, IN DEEP VOODOO will hit the spot!

—Other humorous romantic mysteries for you by bestselling author Stephanie Bond:

IN DEEP VOODOO—A woman stabs a voodoo doll of her ex and he winds up murdered!
PARTY CRASHERS—No invitation, no alibi...
TWO GUYS DETECTIVE AGENCY—Two sisters who are complete opposites take on a failing P.I. agency.