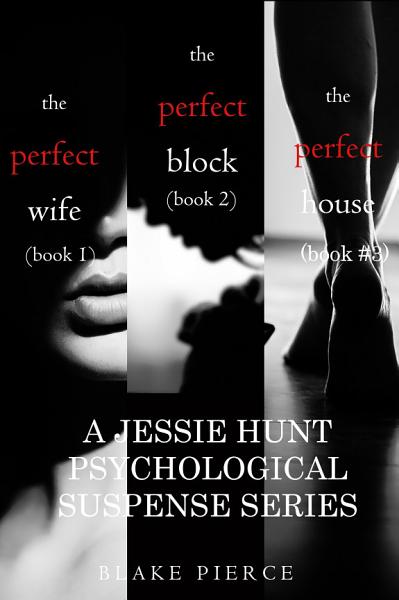 A bundle of books #1 (THE PERFECT WIFE), #2 (THE PERFECT BLOCK) and #3 (THE PERFECT HOUSE) in Blake Pierce’s Jessie Hunt Psychological Suspense Mystery series! This bundle offers books one, two, and three in one convenient file, with over 150,000 words of reading.

In THE PERFECT WIFE, criminal profiler-in-training Jessie Hunt is sure she's finally put the darkness of her childhood behind her. She and her husband, Kyle, just moved from a cramped downtown Los Angeles apartment into a Westport Beach mansion. Kyle's promotion has them swimming in money. And Jessie is on the verge of getting her Master's degree in forensic psychology, the last step in her dream of becoming a criminal profiler. But soon after their arrival, Jessie begins to notice a series of strange developments. The neighbors—and their au pairs—all seem to be hiding secrets. The mysterious yacht club Kyle is desperate to join is rife with cheating spouses, and with troubling rules of its own. And the notorious serial killer being held at the psychiatric hospital where Jessie is completing her degree seems to know more about her life than is normal—or safe. As her world starts to unravel, Jessie begins to question everything around her—including her own sanity. Has she truly uncovered a disturbing conspiracy buried within a sunny, wealthy Southern California beach town? Does the mass murderer she's studying really somehow know the origin of her private nightmares? Or has her tortured past finally come back to claim her?

In THE PERFECT BLOCK, rookie criminal profiler Jessie Hunt, 29, picks up the pieces of her broken life and leaves suburbia to start a new life in downtown Los Angeles. But when a wealthy socialite is murdered, Jessie, assigned the case, finds herself back in the world of picture-perfect suburbia, hunting a deranged killer amidst the false facades of normalcy and sociopathic women.

In THE PERFECT HOUSE, Jessie Hunt fresh from the FBI Academy, returns to find herself hunted by her murderous father, locked in a dangerous game of cat and mouse. Meanwhile, she must race to stop a killer in a new case that leads her deep into suburbia—and to the brink of her own psyche. The key to her survival, she realizes, lies in deciphering her past—a past she never wanted to face again.