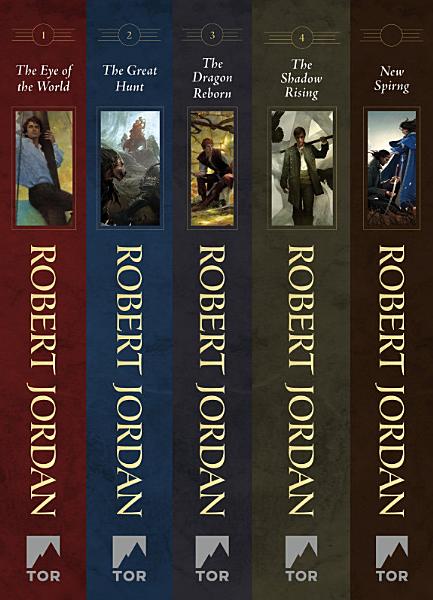 The Wheel Of Time Books 1 4

This Wheel of Time ebundle includes: The Eye of the World, The Great Hunt, The Dragon Reborn, The Shadow Rising, New Spring: The Novel

The Wheel of Time turns and Ages come and go, leaving memories that become legend. Legend fades to myth, and even myth is long forgotten when the Age that gave it birth returns again. In the Third Age, an Age of Prophecy, the World and Time themselves hang in the balance. What was, what will be, and what is, may yet fall under the Shadow.

Since its debut in 1990, The Wheel of Time® by Robert Jordan has captivated millions of readers around the globe with its scope, originality, and compelling characters.


The Eye of the World — When The Two Rivers is attacked by Trollocs—a savage tribe of half-men, half-beasts— five villagers flee that night into a world they barely imagined, with new dangers waiting in the shadows and in the light.

The Great Hunt — Long thought only legend, the Horn of Valere is found, a mystical item able to raise the dead heroes of the ages. But then, everything changes when it gets stolen.

The Dragon Reborn — Winter has stopped the war—almost—yet men are dying, calling out for the Dragon. But where is he? In the Heart of the Stone lies the next great test of the Dragon reborn.

The Shadow Rising — The seals of Shayol Ghul are weak now, and the Dark One reaches out. The Shadow is rising to cover humankind. Against the Shadow rising stands the Dragon Reborn.

New Spring: The Novel — A prequel to the Wheel of Time series: In the city of Tar Valon, a Foretelling of the future is uttered. On the slopes of Dragonmount, the immense mountain that looms over the city, is born an infant prophesied to change the world. That child must be found before the forces of the Shadow have an opportunity to kill him.

By Robert Jordan and Amy Romanczuk
Patterns of the Wheel: Coloring Art Based on Robert Jordan's The Wheel of Time

At the Publisher's request, this title is being sold without Digital Rights Management Software (DRM) applied.