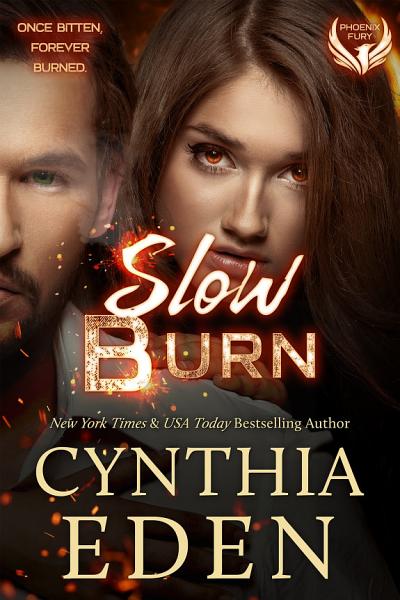 **SLOW BURN is a re-release. It was originally published in 2014 as ONCE BITTEN, TWICE BURNED.**

The king of the vampires is in hell…and he will do anything to get his freedom.

Ryder Duncan has been a prisoner at the Genesis facility for far too long. Trapped, starved, tortured—he is ready to do anything necessary in order to escape. If Genesis wants a monster, he will show his captors just how deadly he can be…

Then an angel is tossed into his cage. A beautiful angel who burns hell-hot and wrecks his world.

With one taste of Sabine Acadia’s blood, Ryder is hooked. Her taste is like no other and the flood of power he gets from her is a supernatural rush. He knows what she is—even before he is forced to watch the flames consume her. Beautiful, magical, more than a myth…Sabine is a phoenix, and when she rises, he vows that she will be his.

Thrown together in an alliance born of blood and passion, they have to trust each other.

Escape is their goal. Freedom their dream. Ryder vows to make their captors pay—in blood—even as he plans to keep Sabine at his side. He’s roamed this earth for centuries, and he’s always searched for his perfect mate. He just never expected his desire for her to burn so hot.

But that’s the thing about fire…even a slow burn will eventually consume you.

Author’s Note: The phoenix shifters are back and hotter than ever. SLOW BURN was originally released by Kensington Publishing back in 2014 (the original title was ONCE BITTEN, TWICE BURNED), and I am so thrilled to have the chance to bring this story back to readers. If you love fierce, possessive, and ever-so-dangerous heroes, then you do not want to miss the king of all vampires. Because Ryder will truly walk through fire in order to claim the woman who is destined to be his…