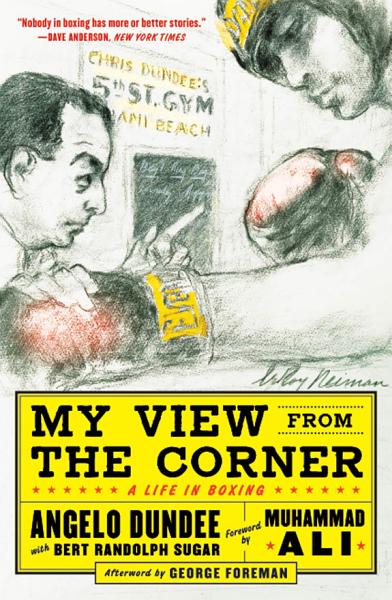 My View From The Corner A Life In Boxing

"The book is written in a highly conversational tone, and by the end the reader will know precisely what it is like to listen to the Bill Walsh of boxing hold court on the exotic art of the cornerman."
--New York Times Book Review

"[H]ere's one for the fans: an as-close-up-as-you-can-get view of boxing's biggest, baddest personalities and poundings."
-Men's Journal

"The teaming of esteemed boxing trainer Angelo Dundee and Bert Randolph Sugar, perhaps the best boxing writer around, produces a lively and insightful look at professional boxing in the second half of the 20th century... His fascinating portraits of Ali, Leonard and Foreman make this a terrific read."
--Library Journal

"This book's appeal lies in Dundee's colorful and punchy personality, as he enlivens the prose with entertaining, Yogi Berra-like jokes, tautologies and euphemisms. It's no surprise that Dundee helped Ali develop his famous rhymes."
--Publishers Weekly

Angelo Dundee was named Manager of the Year by the Boxing Writers Association in 1968 and 1979. In 1994 he was inducted into the International Boxing Hall of Fame. He continues to train boxers and has acted as ringside commentator for many televised fights.

Bert Randolph Sugar is the most recognized and well-known boxing writer in history. The former editor of Ring Magazine and Boxing Illustrated and publisher of Fight Game magazine, he has written dozens of books on boxing and is a regular ESPN sports analyst.