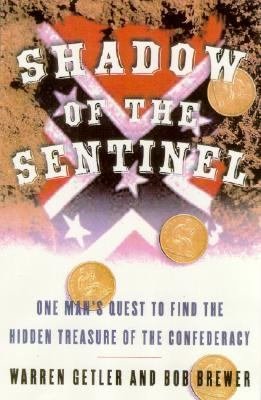 Shadow Of The Sentinel

As a boy growing up in rural Arkansas, Bob Brewer often heard from his uncle and his great-uncle about a particular tree in the woods, the "Bible Tree," filled with strange carvings. Years later he would learn that this tree was carved with symbols associated with the Knights of the Golden Circle, a Civil War-era secret society that had buried gold coins and other treasure in various remote locations across the South and Southwest in hopes of someday funding a second War Between the States. These secret caches were guarded by sentinels, men whose responsibility it was to watch and protect these sites. To his astonishment, Bob discovered that both his uncle and his great-uncle had been twentieth-century sentinels, and that he had grown up near an important KGC treasure site.

In "Shadow of the Sentinel," Bob Brewer and investigative journalist Warren Getler tell the fascinating story of the Knights of the Golden Circle and the hidden caches the KGC established across the country. Brewer reveals how, with agonizing effort, he eventually deciphered the fiendishly complicated KGC codes and ciphers, which drew heavily on images associated with Freemasonry. (Many of the key KGC post-Civil War leaders were Scottish Rite Masons, who used the cover of that secret fraternity to conduct their activities.) Using his knowledge of KGC symbolism to crack coded maps, Brewer has located several KGC caches and has recovered gold coins, guns, and other treasure from some of them.

"Shadow of the Sentinel" is the most comprehensive account yet of the activities of the KGC after the Civil War and, indeed, into the 1900s. Getler and Brewer suggest that the clandestine network of KGC operatives was farwider than previously thought, and that it included Jesse James, the former Confederate guerrilla whose stage and bank robberies helped to fill KGC treasure chests.

This is a rousing and provocative adventure that weaves together one man's personal quest with an intriguing, little-known chapter in America's hidden history.