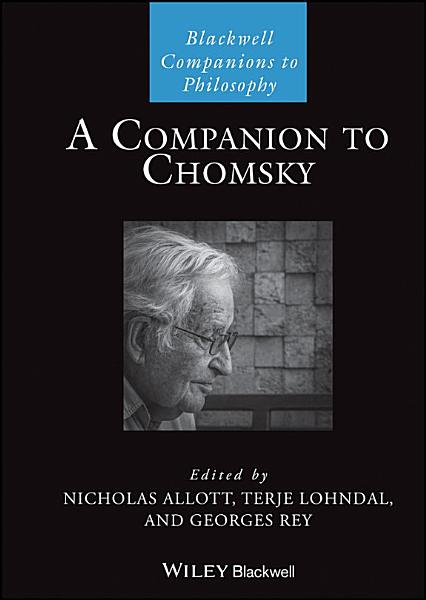 A Companion To Chomsky

A COMPANION TO CHOMSKY

Widely considered to be one of the most important public intellectuals of our time, Noam Chomsky has revolutionized modern linguistics. His thought has had a profound impact upon the philosophy of language, mind, and science, as well as the interdisciplinary field of cognitive science which his work helped to establish. Now, in this new Companion dedicated to his substantial body of work and the range of its influence, an international assembly of prominent linguists, philosophers, and cognitive scientists reflect upon the interdisciplinary reach of Chomsky’s intellectual contributions.

Balancing theoretical rigor with accessibility to the non-specialist, the Companion is organized into eight sections—including the historical development of Chomsky’s theories and the current state of the art, comparison with rival usage-based approaches, and the relation of his generative approach to work on linguistic processing, acquisition, semantics, pragmatics, and philosophy of language. Later chapters address Chomsky’s rationalist critique of behaviorism and related empiricist approaches to psychology, as well as his insistence upon a “Galilean” methodology in cognitive science. Following a brief discussion of the relation of his work in linguistics to his work on political issues, the book concludes with an essay written by Chomsky himself, reflecting on the history and character of his work in his own words.

A significant contribution to the study of Chomsky’s thought, A Companion to Chomsky is an indispensable resource for philosophers, linguists, psychologists, advanced undergraduate and graduate students, and general readers with interest in Noam Chomsky’s intellectual legacy as one of the great thinkers of the twentieth century.