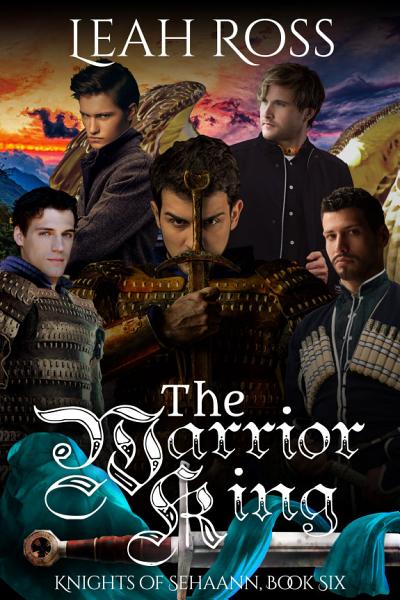 Oron didn’t want to rule Sehaann. But now he’s leading his nation to war for its very existence. He fights for his people’s safety, for a peaceful future, for freedom from the tyranny trying to eliminate him. Heritage has plagued his life and now that legacy hangs on the edge of oblivion. No matter how he got here, he can’t let it fall. Because failure means the end of everything he loves.

Caught between obligation and duty, treachery and redemption, Sanjay is powerless to stop the machinations dragging him into war on the wrong side of the battlefield. He can’t fathom opposing his knightly brethren, but when he’s forced to face Oron from the enemy lines, all of his worst nightmares suddenly become reality. Destroy Oron and the knights of Sehaann, or sacrifice all he holds dear. Either choice means Sanjay loses.

The persistent rage simmering in Kyren’s soul is now a demon threatening to consume him. Everywhere he turns, the consequences of his failure torment and remind him of how unworthy he is of his elite status. He’s a liability to those he’s sworn to protect and jeopardizes Oron’s battle plans at the worst possible moment. If he can’t control his seething vengeance, he’ll lose much more than his position. He’ll take the world down with him.

All William wants is to protect his family. The ones he loves are worth everything to him so he extends his power beyond known limits to help Oron and his army succeed. What he achieves is beyond anyone’s expectation, but it’s more than even an immortal winged warrior can withstand. With godlike energy at his fingertips, he can alter reality to his whim. If he doesn’t obliterate it first.

Overwhelmed and under siege, Taj can barely provide for his own community when refugees start arriving from around the country. As casualties mount, his leadership and therapeutic skills are stretched to the brink. But nothing prepares him for the horror of battle, where seconds mean the difference between life and death. Not even a gifted healer can save everyone. And sometimes, seconds are a luxury that no one can afford.

In the ultimate battle for Sehaann’s survival, honor will be tested, loyalty will be shattered, sacrifices will be made, and no one will emerge unscathed. Everyone’s spent a lifetime giving all they have to fight for what they believe in. Now is when they find out if it’s enough.