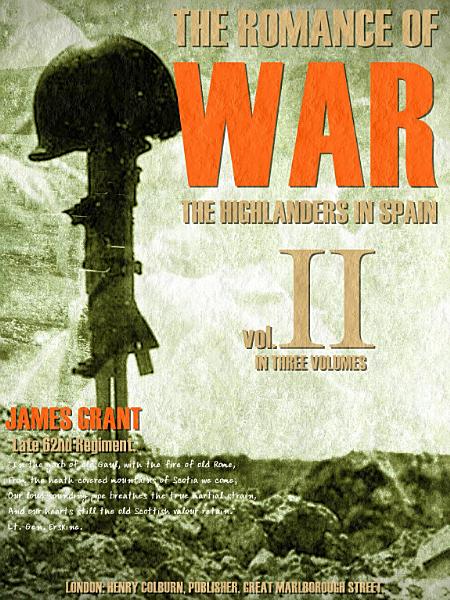 The Romance Of War Vol2 Of 3

Exmaple in this ebook continue from Vol.1

"Well, Ronald, my bon camarado, and so you are really here, and in safety?" said Macdonald as he came up at the head of his sub-division. "Quite well now, I perceive. You received my letter from your servant, of course?"

"Yes. I have a thousand strange adventures to tell you of; but I will reserve them for the halt, which I suppose will be at the castle of Zagala. But meanwhile, let me hear the regimental news."

"Defer that till the halt also,—talking is dry work. A few rank and file were knocked on the head at Fuente del Maistre; but the officers, you may see, are all present. We feared you were on your route for France, when we heard that Dombrouski's dragoons were in Merida."

"A daring deed it was, for a handful of men to advance thus."

"But then they were Poles,—and the Poles are no common troops. Sad work, however, they have made at Merida. Every shop and house in the Plaza has been gutted and destroyed."

"More shame to the citizens! A city containing five or six thousand inhabitants, should have made some resistance to so small a party."

"Ay; but the cits here are not like what our Scottish burghers were two centuries ago,—grasping axe and spear readily at the slightest alarm. By Sir Rowland's orders, Thiele, the German engineer, blew up the Roman bridge, to prevent D'Erlon from pressing upon part of the 13th, who form the rear-guard."

"'Twas a pity to destroy so perfect a relic of antiquity."

"It was dire necessity."

"Did you see any thing of our friends in the Calle de Guadiana,—the house at the corner of the Plaza?"

"Ah! Donna Catalina's residence? Blushing again! Why, no; it was dark, and I was so fatigued when we marched through the market-place, that I could not see the house, and Fassifern is so strict that it is impossible to leave the ranks. But I could observe that nearly all the houses above the piazzas are in ruins. However, we have captured nearly every man of the ravagers. A glorious-looking old fellow their commander is,—a French chef-de-bataillon,—Monsieur le Baron de Clappourknuis, as he styles himself."

"Clappourknuis? That has a Scottish sort of sound."

"The name is purely Scottish. I had a long conversation with him an hour since. He is grandson of the famous John Law of Laurieston, and brother of the French general, the great Marquis of Laurieston.[*] He takes his title of Clappourknuis from some little knowes, which stand between the old castle of Laurieston and the Frith of Forth. What joy and enthusiasm he displayed at sight of our regiment, and the 71st! 'Ah, mon ami!' he exclaimed, holding up his hands. 'Braave Scots,—very superb troupes!' he added, in his broken English, and the soldiers gave him a hearty cheer. He is a true Frenchman of the old school, and has a peculiar veneration for Scotland, which is only equalled by his bitter hatred for England; and all my arguments were lost in endeavouring to prove to him that we are one people,—one nation now. There is one of the 71st, a relation of the Laurieston family: I must introduce him to the baron, who seems to have a great affection for all who come from the land of his fathers.—A handsome young man, apparently, this Louis Lisle, our new sub."

To the political or historical reader, the names of the marquis and his brother will be familiar. The house of Laurieston stands within four miles from Edinburgh, on the south bank of the Forth.

To be continue in this ebook...