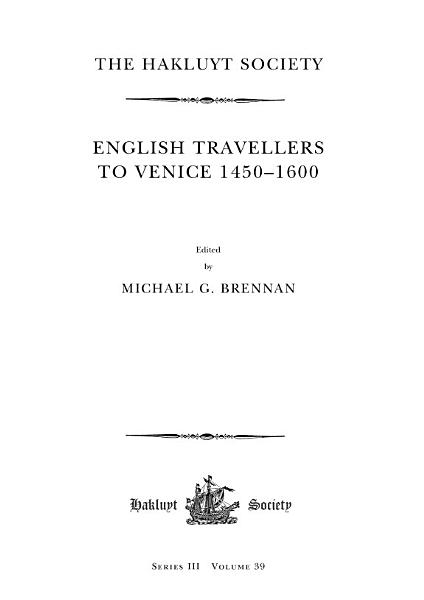 English Travellers to Venice 1450 –1600 contains 35 separate accounts (with 27 colour and 45 black and white illustrations) of the experiences of a wide range of English travellers to Venice. These accounts, drawn from contemporary manuscript and printed sources, provide vivid impressions of the challenges and hardships endured by visitors to the city and of the complexities of Anglo-Venetian relations during the pre- and post-Reformation periods. They also communicate these travellers’ sense of wonder at the city’s grandeur and artistic treasures and their enduring fascination with Venice’s republican government, political structures and Mediterranean possessions. These travellers include pilgrims, scholars, religious exiles, ambassadors, English courtiers and noblemen, eccentric and renegade characters, seafarers and an undercover intelligence gatherer during the late 1580s for Sir Francis Walsingham, Queen Elizabeth’s ‘spymaster’.

This volume’s introduction assesses elements of Anglo-Venetian contacts between 1450 and 1600 and examines some specific topics, such as: the leading role of Venetian naval experts in attempts in 1545 to salvage Henry VIII’s flagship the Mary Rose; a first-hand account by an English visitor’s servant of the disastrous and lethal 1575–7 outbreak of the plague at Venice; and, during the build-up to the Spanish Armada, the impressive international reach of the Venetian intelligence service which enabled the doge and Council to remain well informed about both Spanish and English plans. In addition to the colour plates, illustrating the brilliant artistic achievements of Venetian art by Bellini, Carpaccio, Titian, Veronese and Tintoretto, the volume includes a selection of engravings of Venetian life from the renowned collections of Giacomo Franco. A wide range of illustrations is also included from important early maps of Venice, by Erhard Reuwich for Bernard von Breydenbach’s Peregrinatio in Terram Sanctam (1486), Hartmann Schedel’s Liber chronicarum (1493), Jacopo de’ Barbari’s aerial view of Venice (1500) and the stunning map of Venice in Civitates orbis terrarum (1572–1617) by Georg Braun and Frans Hogenberg. Perhaps most remarkable is that many of the locations, buildings, religious objects and artistic treasures described in this volume may still be seen today by visitors to this unique Italian city, renowned for centuries as ‘La Serenissima’.