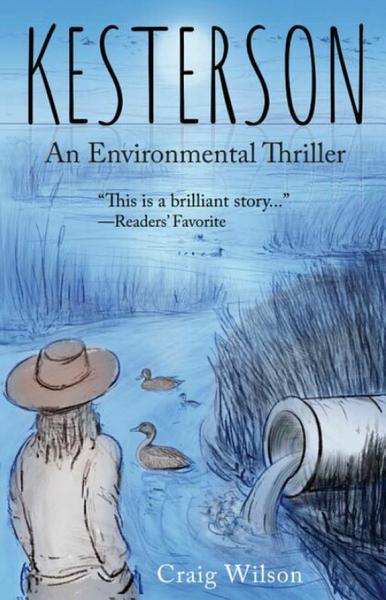 Is corporate greed powerful enough to coverup an environmental disaster of epic proportions? Probably not now but what about in the 1980’s. Kesterson is a fast paced environmental thriller that examines that question. The novel is a fictional account of the Kesterson Reservoir saga, a real life horror story involving the deaths and deformed embryos of thousands of waterfowl at a National Wildlife Refuge.

As the story unfolds, Kesterson Reservoir is initially hailed as one of the greatest success stories of the arid water world of the western United States. A thriving wildlife refuge is created through the use of farmers’ unwanted drainage water. Everything changes when horrific bird deaths are discovered at Kesterson by an adjacent property owner. As his reward for making this grisly discovery, the property owner is murdered in what is made to look like an accident.

Two young environmental attorneys will not let the story die. As they build their case that the drainage water is causing the bird deaths and should be stopped, they are pitted against the ruthless director of the nation’s largest Water District and the might of the federal government.

After a series of twists and turns involving blackmail, intimidation, coverup, evasion, and graft, it looks like the bird deaths will be forsaken. But after new evidence comes in from an unlikely source, the decision on whether to shut down Kesterson is ultimately decided by a novel interpretation of the attorney client privilege.

This snappy novel will appeal to readers who love environmental issues, plot twists and surprises.

“Kesterson will keep you on the edge of your seat...loved the explosive scenes in the court...very realistic but also unnerving.” --Readers’ Favorite (First 5 star review)

“There was a twist at the end that I never saw coming, it was fascinating. A definite must read .” -- Readers’ Favorite (Second 5 star review)

“This is a really good read...the simplicity of prose is a welcome reprieve.” -- Readers’ Favorite (Third 5 star review)