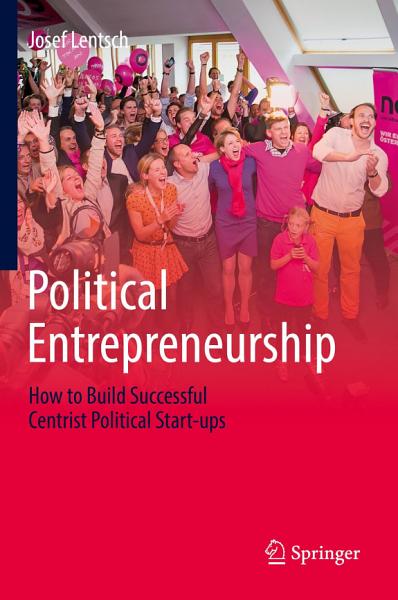 This book demonstrates how political entrepreneurs – entrepreneurially minded citizens who launch innovative political start-ups – can drive political change. Building on unique insights, rich examples and personal stories of centrist political entrepreneurs distilled from 40 in-depth interviews, the author guides readers through key stages of political entrepreneurship, and shows how to master them. By equally highlighting successes and failures, the book reveals how political entrepreneurs actually go about producing transformative political change.
In light of the populist challenge and the decline of traditional political parties, the book also offers an entertaining backstage view and first-hand insights into the successes of En Marche in France, Ciudadanos in Spain, NEOS in Austria and other centrist political startups. It provides practical advice on how to learn from and replicate their successes. Political practitioners and other politically interested readers will find a useful theory of Political Entrepreneurship – what it is, how it works, and what its role is in 21st century democracies. Most of all, they will find essential, reproducible tools and methods.

“You have read a lot about startups in business, but if you want to know how Silicon Valley style startups look in politics, read this. Its author is not only writing about political entrepreneurs, he is one of them.”

Ivan Krastev (Chairman of the Centre for Liberal Strategies in Sofia, and permanent Fellow at the Institute of Human Sciences in Vienna)

“No one understands better what it takes to take a political start up from ideation to the parliament than Josef Lentsch. In ‘Political Entrepreneurship’ he combines first-hand experience with a thoughtful review of what we know about entrepreneurship in the interest of society.”

Johanna Mair (Professor of Organization, Strategy and Leadership at the Hertie School of Governance, and Co-Director Global Innovation for Impact Lab at Stanford University)

“Josef Lentsch has produced a fascinating, commanding guide to the new, insurgent players shaking up traditional party systems and reinvigorating liberal politics. Political Entrepreneurship is essential reading for anyone who wants to understand today's fragmented and disrupted European politics - and the European politics of the future.”

"The rarest of events has occurred - a new political species has appeared in the European eco-system, the centrist political start up. From Macron's En Marche in France to Spain's Ciudadanos, a new type of political actor has emerged. Few are better positioned to tell this Europe-wide story than Josef Lentsch who has had a front-seat view on this important political transformation that is shaking Europe. A dramatic and important account."