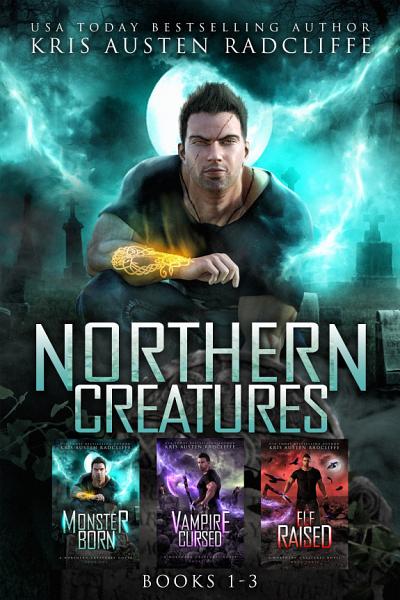 What happens when a man starts life as a corpse?

Two hundred years ago, Frank Victorsson awoke as a semi-dead, monstrous abomination reanimated by his hubris-ridden father, Victor Frankenstein. But Frank refused to become the infernal hate his father spewed at the world. He walked away from his origins — and into a small, Minnesota town overflowing with magic.

Enter the uniquely magical world of Northern Creatures with the first three stories:

Monster Born: The Nordic elves of Frank’s new home call him family. The werewolves call him friend. And when the town’s vampires disappear and innocents die, Frank realizes the demon responsible might be the one force on Earth faster and stronger than him — and the one foe capable of pulling to the surface his long-suppressed rage.

Vampire Cursed: Frank thought the demon vampire unleashed from The Land of the Dead had turned to ash. Then the horses vanished, and the corpses began to appear. When an inexplicable fog rolls into town, Frank realizes the evil infesting his town has grown deadlier than any monster his father created — and it wants to suck Frank dry....

Elf Raised: Werewolves, vampires, and witches have been allowed to cause problems in Arne Odinsson’s domain, and the other Elven Courts want an explanation. Arne and his people must defend themselves, but when Frank makes the mistake of offering his services to a trickster god, he and Remy Geroux must navigate not only angry spirits and elven politics, but also a horde worse than vampires—Las Vegas tourists....

Northern Creatures, where the man formerly known as Frankenstein’s Monster navigates Nordic elves, vampires, and technologically advanced fae as the world staggers toward the one thing no one wants: Ragnarok.