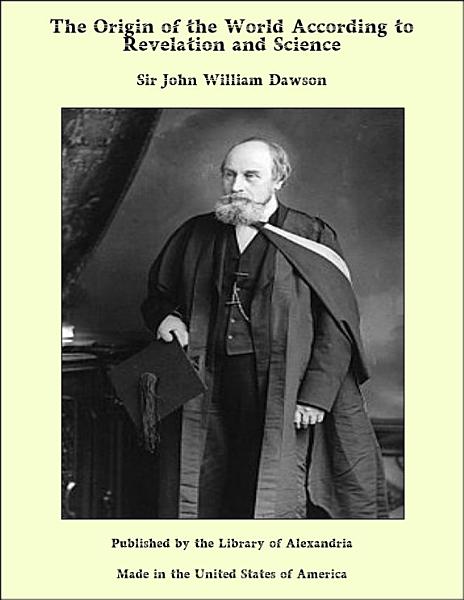 The Origin Of The World According To Revelation And Science

Have we or can we have any certain solution of those two great questions—Whence are all things? and Whither do all things tend? No thinking man is content to live merely in a transitory present, ever emerging out of darkness and ever returning thither again, without knowing any thing of the origin and issue of the world and its inhabitants. Yet it would seem that to-day men are as much in uncertainty on these subjects as at any previous time. It even appears as if all our added knowledge would only, for a time at least, deprive us of the solutions to which we trusted, and give no others in their room. Christians have been accustomed to rest on the cosmogony and prophecy of the Bible; but we are now frankly told on all hands that these are valueless, and that even ministers of religion more or less "sacrifice their sincerity" in making them the basis of their teachings. On the other hand, we are informed that nothing can be discerned in the universe beyond matter and force, and that it is by a purely material and spontaneous evolution that all things exist. But when we ask as to the origin of matter and force, and the laws which regulate them—as to the end to which their movement is tending, as to the manner in which they have evolved the myriad forms of life and the human intelligence itself—the only answer is that these are "insoluble mysteries."

Are we, then, to fall back on the real or imagined revelations and traditions of the past, and to endeavor to find in them some foothold of assurance; or are we to wait till further progress in science may have cleared up some of the present mysteries? Whatever may be said of the former alternative, all honest students of science will unite with me in the admission that the latter is hopeless. We need not seek to belittle the magnificent triumphs of modern science. They have been real and stupendous. But it is of their very nature to conduct us to ultimate facts and laws of which science can give no explanation; and the further we push our inquiries the more insuperably does the wall of mystery rise before us. It is true we can furnish the materials for philosophical speculations which may be built on scientific facts and principles; but these are in their nature uncertain, and must constantly change as knowledge advances. They can not solve for us the great practical problems of our origin and destiny.

In these circumstances no apology is needed for a thorough and careful inquiry into those foundations of religious belief which rest on the idea of a revelation of origins and destinies made to man from without, and on which we may build the superstructure of a rational religion, giving guidance for the present and hope for the future. In the following pages I propose to enter upon so much of this subject as relates to the origin and earliest history of the world, in so far as these are treated of in the Bible and in the traditions of the more ancient nations; and this with reference to the present standpoint of science in relation to these questions.